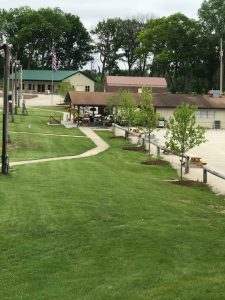 Originally, the membership met at the old Fish Hatchery near Bohners Lake. The club moved to its current location on Brever Road in 1962 and constructed a small clubhouse with two trap fields. The clubhouse was expanded in 1964 to its current size. A third trap was added in the late 1970’s and the fourth trap and skeet range were constructed in 2004. The covered outdoor seating area was added in 2010. We built a new Youth Training Center in was constructed behind trap 4 to house our two SCTP teams. In 2016, a portable heated five-stand was built in the fall of 2016 providing another discipline for our members and guests and allowed the club to remain open year round.

Since its founding, the club has supported wildlife conservation and outdoor activities in the Burlington area, none are more prevalent than the annual Kids Fisheree; offering a day of free fishing to all area youth. Originally this was an ice-fishing event, and the first Kids Fisheree was held on Bohners Lake in 1967; as of the late 1970’s it was moved to Echo Park and is held in the month of May. It is estimated over 12,000 Burlington area youth have participated over the last fifty-plus years.

Our club is open to the public for trap, skeet shooting, and our new 5-stand setup. Each year we host several special shoots. We place an emphasis on our youth, which include WI DNR Hunter Safety classes, hunting, fishing and youth gun instruction.

In 2006, General Manager Tom Wondrash approached the Burlington School Board with an opportunity to build a competitive trapshooting team to participate in the Scholastic Clay Target Program. Today, there are nearly seventy (70) fifth (5th) to twelfth (12th) grade students in the program. The BHS Demons Trap team has produced several state champions, and swept every competition it attended in 2009 and 2011. The team won two National Championships in 2011 earning gold medals in both American Trap and Olympic Doubles Trap at the SCTP Nationals. In 2012 the Demons finished first and third in American Trap at the SCTP Nationals in the High School division and missed back to back overall championships by just three targets. The team rebounded in 2013 to win the overall SCTP American Trap Championship along with the Sporting Clays championship in the High School division.

In 2010, the club also became the host club to the Waterford High School trap team, reinforcing the club’s commitment to area youth. The Wolverines team has grown to be one of the largest in the state approaching nearly 100 athletes and winning several SCTP state championships and podium finishes along the way.

Meetings are held the second Tuesday of every month at 7:00 pm at the club. All members are welcome.